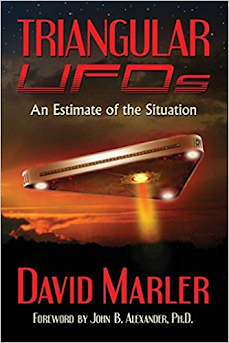 I often have people contacting me in reference to what UFO books or films they should be checking out.  While I do not know every piece of literature on the subject out there, here's a short list of what I feel are some of the best and most credible books or videos on the subject.

Without hesitation, I call David Marler the premier black triangle researcher and investigator in the world.  I highly recommend visiting David Marler's website and purchasing his book.  David is a level headed researcher who does not buy into the hype and nonsense too often found in UFOs.  David has been most recently featured in an episode of Unidentified and in James Fox's documentary The Phenomenon. The image below will take you to his excellent book and it is a must read.

UFOs AND NUCLEAR WEAPONS
Robert Hastings has been investigating and researching cases involving UFOs intruding over nuclear weapons facilities for nearly five decades, and his incredible book is absolutely required reading.  Robert was featured in Unidentified and his work can be see in The Phenomenon.  Robert also was able to produce a documentary about his work, UFOs & Nukes: The Secret Link Revealed.
THE PHENOMENON
I think James Fox's UFO documentary is the best out there currently - it crushes the terrible Skinwalker Ranch and Bob Lazar films.  Great for the layperson, also for the not-so-casual interest in UFOs.
PROJECT BETA: THE STORY OF PAUL BENNEWITZ, NATIONAL SECURITY, AND THE CREATION A MODERN UFO MYTH
Greg Bishop's insightful, revealing and astonishing book on UFO disinformation campaigns, the targets of these campaigns, the dangers of myth and lies, and the creation of one of the greatest hoaxes to haunt UFOs.  This is a landmark book and a must read.
THE UTAH UFO DISPLAY
Dr. Frank Salisbury along with the Uintah Basin's legendary investigator Junior Hicks, deliver some of the best and most baffling UFO sightings and creature encounters.  This book also features information that sheds light on some of the claims made about the original investigation and activity at the now infamous Skinwalker Ranch.
FORBIDDEN SCIENCE
These are the journal entries of Dr. Jacques Vallee, the man who was the inspiration for the French scientist in the film Close Encounters of the Third Kind.  These journals represent an intimate view of Vallee's early life surrounded by world events and his quest for UFO evidence.
at October 25, 2020