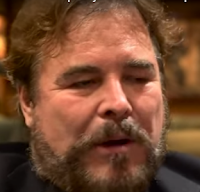 In what amounted to a mere day and a half of trial time, the United States presented and rested its case against Sean David Morton who, along with his wife/co-defendant, is charged with 56 felony federal crimes including fraud and conspiracy.

The government presented its witnesses and introduced its evidence, which was apparently answered by Morton (pictured left) filing a motion to dismiss the case, which was in turn denied.

Morton and his wife were arrested by federal agents after disembarking from a 2016 Conspira-Sea cruise in California.  Morton and his wife are accused of defrauding the U.S. government out of nearly $500,000.00 they obtained using what the government claims was a falsified tax return.  The government also claims The Mortons quickly moved to withdraw the money to hide it, including a $70,000.00 cash withdraw.  The government alleges The Mortons also filed another false tax return in an attempt to obtain a nearly $3,000,000.00 return.
In a 2013 bankruptcy proceeding, Morton stated under oath he was unemployed and did volunteer work claiming his hosting of an Internet radio show where subscribers were charged to listen to past shows and for merchandise was part of his volunteer work.  Morton also claimed he donated his time speaking at conferences in exchange for travel expenses and was not paid.

During the bankruptcy proceeding, Morton claimed the IRS owed him a tax return of over $4,000,000.00, a substantial return for someone claiming to be unemployed and recently evicted from his apartment.

The Mortons (pictured left) are also charged with filing false tax returns and financial instruments on behalf of others and charging people in what has been called a "financial redemption scheme", charging one couple $10,000.00 to eliminate their debts and tax problems with bogus bonds.  The couple's financial problems were not resolved by The Mortons who are alleged to have refused to refund the couple's money.

If convicted on all counts, The Mortons could face life in prison.

The man is a lying, delusion piece of shit. Jail time.