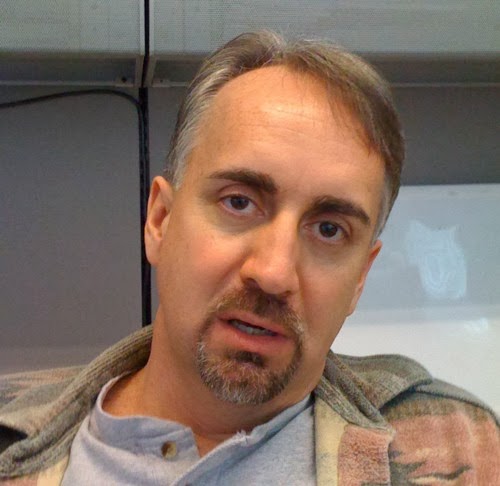 (Stan Romanek pictured above.  Please note that the charges police have announced against Romanek are not susbstantiated at this time, and Romanek is considered innocent until proven guilty.)

Loveland, Colorado police have arrested infamous/famous/and a bit wacky self proclaimed alien abductee Stan Romanek (pictured above) on two felony counts of Sexual Expolitation of a Child.  Loveland police launched an investigation after receiving a tip from the Department of Homeland Security and that investigation resulted in a search warrant being served on Romanek's house last April.

An arrest warrant was issued for Romanek, who later turned himself in to police. You can read all about it here.  It is unknown if a trial date has been set, but Romanek has apparently been released from jail on a recognizance agreement.

Romanek is well known in UFO circles after he allegedly filmed an alien peering in through a window.  The video, which you can view here on Youtube, has an interesting description posted along with the video that reads in part, "This is the real ET in the window video shot by Stan Romanek using a Sony Hi8 Camcorder! On July 17, 2003 Stan Romanek and his wife thought they had a problem with a Peeping Tom."

Romanek's wife, Lisa Romanek, posted a message on her Facebook page that read in part, "We will be taking UFOlogy into the courtroom. We know that this has EVERTING [sic]... to do with our being outspoken about the ET/UFO reality!"

Romanek's wife is the author of From My Side of the Bed, which she claims is an account of her perspective on Romanek's alleged alien abductions.

On a related note, late UFO researcher and Billy Meier cheerleader Wendelle Stevens was charged in 1983 by Arizona police with Child Molesting, Films and Pictures of Minors in Sex Act, and Furnishing Obscene Matter to a Minor.  Stevens claimed he had been set up but later pleaded guilty and served a 5 year prison term.

Let's pray this is the end of him and his hoaxes.