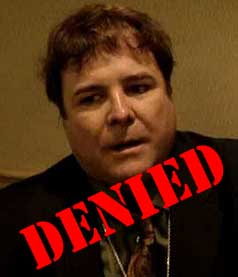 Not even self proclaimed psychic Sean David Morton saw it coming, but clearly a federal judge did.  After losing in court to the SEC over allegations that Morton and a co-defendant bilked investors out of over $6,000,000 in what the SEC called a "psychic scheme", Morton attempted to file for bankruptcy only to have that filing denied.

On 02/05/15,  a U.S. Federal judge found Morton and co-defendant, wife Melissa Morton, to be in default and denied their joint bankruptcy claim.  This comes on the heels of the Mortons both filing babbling, incoherent legal papers multiple times with the courts making claims such as not having access to proper currency to pay debts and that Melissa Morton was a manufactured entity and other nonsense.

At one point, Morton claimed he has used his unsubstantiated remote viewing abilities to win money in a casino in Las Vegas playing roulette. Morton claimed the amount was $11,000.00, then later said it was $13,000.00.  Don't you think that Morton would have just used these so-called powers to either see what was coming or to win enough money that he'd never have to worry about running an investment scheme?  I think the answer to that is patently clear...