Just found out about this little gem and I'm not surprised at all.  Looks like they're both facing serious time and have dug themselves yet another, deeper hole.  I'm sure the excuses offered from them will be...interesting...yeah.

Morton posted this amusing comment on his Facebook page, "Never believe what the evil empire and main stream liars say. They always twist the truth and try to silence those who are bringing the truth and light to the world."

Yes, Sean, we all know the evil government is out to get you because of all the truth, light, unicorns, and rainbows you've brought to the world, say, like the 100 people you defrauded out of over $6,000,000 including an old lady's retirement.  Yep, you're upstanding.

It'll be interesting to see what happens with the 56 count indictment Morton and his wife are facing.  My prediction?  It doesn't end well for either of them. Morton has a history of filing bizarro legal documents with the courts and it wouldn't surprise me if he did the same tinkering with his tax returns.  Here 's another link in addition to the story below and another here. 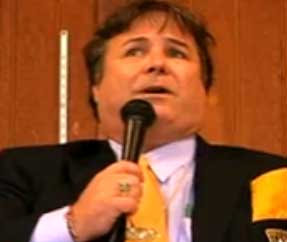 A 56-count federal grand jury indictment alleges Sean Morton filed a false income tax return in 2010 that requested a refund of $2.8 million and another in 2012 that sought nearly $1.6 million, prosecutors said.

The Mortons are each charged with one count of conspiracy to defraud the United States and two counts of making false claims to the United States. They also are charged with submitting false documents to the Internal Revenue Service, the California Franchise Tax Board, banks, mortgage and student loan companies, and county tax collectors, as a means to pay off debt.

If convicted, Sean Morton could face up to 650 years in federal prison. His wife faces up to 625 years in prison.

And this looks like the press release from the IRS Criminal Investigations division:

IRS enforcement arrested two Hermosa Beach residents after being indicted by a federal grand jury on numerous charges including passing bogus checks and bonds as a way to pay off debt for themselves and others, according to authorities.
The two were charged with a scam to defraud the Internal Revenue Service, officials said.

Sean David Morton, 58, and his wife, Melissa Ann Morton, 50, were named in a 56-count superseding indictment that was returned by a grand jury on January 27.
The couple was arrested by special agents with IRS – Criminal Investigation in San Pedro Sunday morning after disembarking from a “Conspira-Sea Cruise.”

If they are convicted of the charges, Sean David Morton is facing up to 650 years in federal prison, and Melissa Morton is facing up to 625 years, according to officials.
According to the superseding indictment, Sean David Morton filed a series of false income tax returns for the years 2005 and 2010 that sought millions of dollars in refunds. Melissa Morton allegedly filed several false tax returns for the year 2007.
The couple “caused multiple copies and multiple versions of their income tax returns to be submitted to various IRS service centers throughout the United States in 2009 and 2010,” according to the indictment, which alleges they attached false Forms 1099-OID to support their claims for refunds.

The indictment specifically alleges that Sean David Morton filed a false 2006 income tax return 2010 that requested a refund of $2.8 million and that in 2012 he filed a document that sought that for tax refund of $1.5 million for 2006.

In relation to the scheme, the indictment alleges that Sean David Morton on multiple occasions submitted to the IRS documents he called “Coupon for Setoff, Settlement, and Closure” in the amounts of $5.3 million and $8,429,763.

“These fictitious financial instruments were a purported bond in exchange for the refunds they sought from the IRS,” according to the indictment.
“Those who try to defraud the tax system often try to use complicated ‘legal’ filings to hide their true goal – stealing money paid by other taxpayers,” said U.S. Attorney Eileen M. Decker. “IRS agents and federal prosecutors have the tools to investigate and prosecute these sophisticated schemes, which undermine the entire tax system and ultimately victimize law-abiding taxpayers.”

Melissa Morton allegedly presented to the IRS in 2010 a “Coupon for Setoff, Settlement, and Closure” in the amount of $44,450 as a purported bond in exchange for a $14,450 refund that she sought.

And, in 2013, both defendants allegedly gave the IRS two “Non-Negotiable Discharging Bond and Indemnity” in the amounts of $10 million for Sean David Morton and $600,000 for Melissa Morton.

In relation to the tax returns and other documents submitted to the IRS, the Mortons are each charged with one count of conspiracy to defraud the United States and two counts of making false claims to the United States.

The indictment also charges Sean David Morton and Melissa Morton each with 24 counts of presenting false and fictitious instruments and documents – specifically items called “Non-Negotiable Discharging Bond and Indemnity” – which purported to be actual securities and financial instruments issued under the authority of the United States.

These documents were submitted to the IRS, the California Franchise Tax Board, banks, mortgage companies, student loan companies, and county tax collectors, supposedly as a means to pay off debt.

Melissa Ann Morton was charged with 25 counts of presenting or passing these documents. The Mortons allegedly also assisted others in presenting these false and fictitious instruments in amounts as high as $1.5 million.

“People who create elaborate schemes that have no purpose other than to defraud the IRS run the very high risk of prosecution.”

An indictment contains allegations that a defendant has committed a crime. Every defendant is presumed innocent until and unless proven guilty in court. The investigation into the Mortons was conducted by IRS – Criminal Investigation.
at February 05, 2016

Sean Conman Morton apparently made $10,000 bail. I thought he said he was bankrupt.

Apparently the legal tricks that Sean talked about on the cruise only went so far . . .

Evidently his 'psychic powers' couldn't warn him of the IRS agents waiting pier-side for him and his wife. Well, it won't be much of a change going to a jail cell from their 'secret basement command center' (lined with tin-foil, of course).