Sorry, IRS, I'm withdrawing from your rules. Because.

Wouldn't it be great if you had a magic piece of paper and pen that allowed you to write a letter to someone and simply tell them you're no longer responsible for anything?

"Hello X, sorry I backed into your car, but I'm voiding my responsibility in this matter."

"Hello X, I did agree to pay back that loan, but have since changed my mind.  Our agreement is void."

"Hello X, I just don't feel like paying any of my bills.  All bills owed by me are now void."

How about this one, which I think every tax payer wishes they could do:

"Hello Mr. IRS Director, be it know I have rescinded all contracts made between the IRS and I."

This is exactly what Sean David Morton has done and in some nutty way seems to believe that this will relieve him of any civil or criminal liability he currently faces.

Now Morton has filed an incredulous notice to the courts claiming him and his convicted felon wife/co-conspirator Melissa Morton free of all contracts including those of the IRS.  Well, this little contract is called the law and all U.S. born citizens fall under it.  Morton has made the ridiculous assertion that he isn't a citizen under U.S. authority, yet he had no problem filing for bogus refunds with the IRS, appearing in court on multiple occasions, and attempting to file for bankruptcy through the courts.

But that isn't all.  Oh, no, that would be too simple.  In addition to the ludicrous notice Morton filed, he also filed the following "demand[ing]" the court to vacate his conviction and sentencing because the judge isn't a real judge and has no jurisdiction in the matter, and no actual claim was ever stated.  Morton goes as far to claim the federal court is not a court of record.  It gets better...

"I am a private man, this public non judicial trial is destroying me!"

"The situation has destroyed me by law enforcement being lawless!"

"I require and demand the case and jury convicrion [SIC] is discharged, vacated, set aside because it is void, not voidable."

Morton, who is facing serious federal prison time after being convicted of fraud, has filed a litany of babbling legal motions with the court making demands including that the IRS agents who arrested him and the U.S. Attorney General's Office lawyers who prosecuted him must fall under his authority in "Morton Court".

Morton had the opportunity to retain legal counsel and chose to represent himself. Morton has advertised himself as a "constitutional and legal expert".  Morton tried to claim he was just following the advice of people he trusted when he and his wife began filing bogus tax returns with the IRS asking for millions in tax refunds.M  orton has no excuses, though it is clear by all these amateur, nonsense laden, ranting court filings he's manufactured, he's as much of a "legal expert" as he is a psychic.  How did Morton not see this all coming?

Sentencing for Morton is scheduled for June 19th... 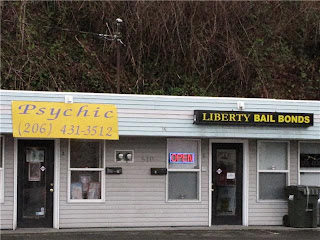