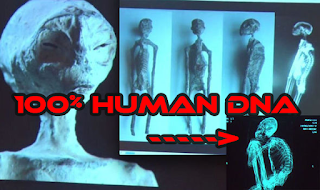 Looks like another "alien body" has bitten the dust.  A while back, the paid subscription website Gaia.com along with notorious UFO hoax promoter Jaime Maussan were advertising they had found what was described as a possible alien mummy.  Gaia.com made short work of producing some slick commercials to build the drama of this supposed discovery with many of those commercials running via Facebook ads for their monthly subscription service.

Well, the folks at Gaia.com and Jaime Maussan shouldn't be too quick to pat themselves on the backs just yet.  It looks like the DNA results are making the rounds everywhere except on Gaia.com or any of Maussan's social media.  What is making the rounds on social media is the following image purportedly from the lab performing the DNA analysis on the Nazca mummy: 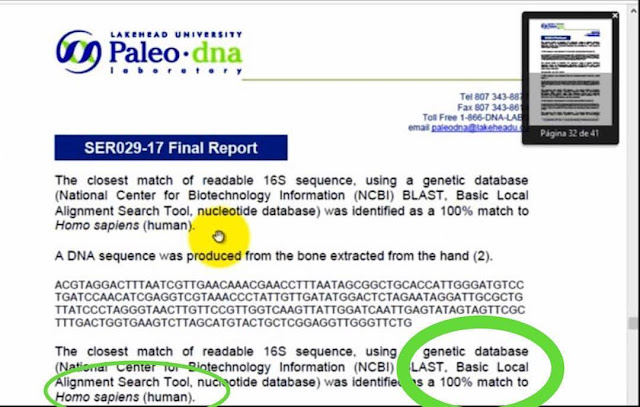 This looks to be a single page from a forty-two page report and this page clearly states that a bone sample taken from the hand of the mummy was examined and found to be "a 100% match to Homo sapiens (human)."

There you have it in very plain words; the mummy is human.  End of story.  It should be, but now Gaia.com is saying the results were 99% in an attempt to muddy the waters so they can further attempt to propel this story in an effort to hook more subscribers.  It was predictable that Gaia would put some kind of spin on this to try to keep this story alive.  If Gaia.com was dedicated to the truth they make their mantra, then why have they not released the full DNA report?

Nothing Gaia.com has put forth to date proves this mummy is anything but and even that's a maybe.  We've seen a lot of slick social media ads, a few well produced videos, a lot of talk, and very little in terms of scientifically verifiable evidence.

"Time for Truth," at least this is how Starworks USA is advertising their symposium with scheduled speakers set to talk all about the Nazca mummy including Jaime Maussan.  Curious if they'll be informing the public about the results showing this "alien mummy" DNA came back as 100% human.  Probably not, after all these people make good money from this when they're able to hook a lot of gullible people in at $300 a pop and more.  At least you get an "all you can eat taco buffet", because, well, classy.

I see pictures of two wholely reliable paranormal experts: George Snoory and Jaime Mauusan. Well, that does it for me!