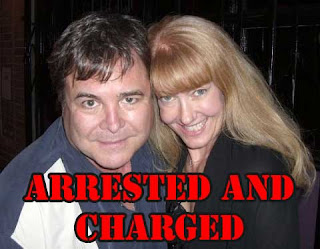 If you missed it, bunk psychic Sean David Morton and his wife/alleged co-conspirator Melissa Morton have both been indicted by a federal grand jury and were arrested on allegations they defrauded the U.S. government.  Specifically, they're both accused of filing doctored tax returns and bonds with the IRS.  You can read the extensive 56 count indictment here.

The Mortons were taken into custody by federal agents after they disembarked from a cruise ship for the 'ConspiraSea' cruise where Morton was a speaker and apparently gave some pretty shoddy legal advice - Morton is not an attorney nor does he possess a law degree.  Wired.com also briefly covered this 'ConsipraSea' cruise.  Ironically, The Mortons have both been charged with conspiracy.

Morton is accused of filing false tax returns and other fraudulent documents, as well as assisting others in filing fraudulent tax returns.  In one instance, Morton claimed the IRS owed him in excess of a $1.75 million return, and this appears to not be the only false claim he filed along with his wife.  In turn, it looks like Melissa Morton took money into a personal bank account and transferred more than $360,000 into an account belonging to Sean David Morton; he later withdrew $70,000 in cash.

Is this all somehow tied in to the securities scheme Morton and his wife cooked up to defraud investors out of more than $6,000,000 dollars?  One can only wonder what lies in this latest twisted nest of snakes involving Morton.

So will The Mortons skate on all these charges and avoid prison?  I sought the advice of something with a much higher psychic hit rate than Sean David Morton could ever dream of having.  The answer?

I hope this piece of crap gets what he deserves...

SDM is a regular on Freedom Radio, Strange Universe. He has a charisma, but I had to check him out.
Sadly, I've become cynical. Sounded too good to be true.👽😩