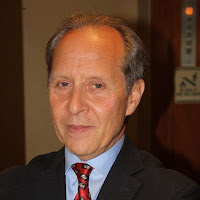 The Rendlesham Forest Incident is considered by many to be one of the most credible UFO cases.  Though recently, one of the alleged witnesses in the case has come under fire.  A lot of questions have been raised about the credibility of witness Larry Warren; allegations of lying, fraud, forging a photograph of Warren and John Lennon, and his story about witnessing events at Rendlesham - that being some claim Warren was never present at the base during the time of the incident.

Larry Warren and UFO investigator Peter Robbins (pictured left) authored the book Left at East Gate about the Rendlesham UFO encounter.  Since information about Warren has come to light, some wondered what Robbins would do since he was an advocate for Warren and coauthored a book with him.  Robbins has recently made a rather lengthy posting on Facebook about Warren:

Pathological. It's tough to finally admit when you have been had by these egomaniacs because rarely do we run into such people, but they are out there. I dated someone like this, she couldn't get her life going no matter who helped her and I lost $20,000 just keeping her life afloat until I realized I don't have the skills, power, or responsibility to fix this person and if I stay it will destroy me. I lucked out. You try to do the right thing, you were raised that way, but you have to realize when this person is not getting better, and they don't want to.

I've found the warning signs are 1) Grandiose ideas of themselves 2) No one understands me 3) Money trouble 4) Lies or tall tales 5) No long term close friends 6) Blames mostly others for being held back 7) Drug, Sex, or Alcohol problems 8) Impulsive.

Of course then you get the Bernie Madoff or Lance Armstrong types that completely embraces their lies to such an extent that it seems impossible to believe they could do such a thing.

Our society really needs to teach people in school what to watch out for with these mental disorders. They can destroy lives. They're out there right now. The ufo subject is just one of many avenues they follow to gain power, money, and acceptance.