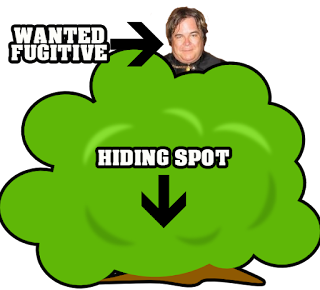 It's been sixteen days since bunk psychic and convicted felon Sean David Morton has been on the run.  Morton failed to appear on June 19th for his criminal sentencing stemming from his conviction on over fifty felony charges in a tax scheme that netted over half-a-million dollars.  Morton's wife, Melissa Ann Morton (aka Melissa Thomson), was also convicted and her sentencing is scheduled for August 24th.

There's been no real news on the whereabouts of Sean David Morton, though he allegedly was in the Los Angeles area the day he was supposed to be in court for sentencing.

A number of people speculated whether Morton would show up in court for his sentencing considering he was looking at 87 months in federal prison.  ufowatchdog.com did receive an image of a conversation allegedly involving Morton where it shows Morton stating in response to going to prison, "Never going to happen.  This is very far from being over." 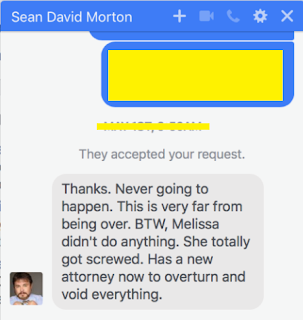 Now instead of facing 87 months, Morton is looking at the possibility of an additional five years in prison for absconding from his sentencing.  Morton could have shaved a little over a year off his sentence for good behavior, as inmates can earn up to 54 days of early release per year served.  Morton is considered a fugitive and a warrant was issued for his arrest, which now means the FBI is involved in tracking Morton down.

Recently, a You Tube interview with Morton was released where Morton defends his actions and continues to claim he is being targeted by the government in a conspiracy.  As usual, the hosts of this video ask no pointed or tough questions, instead opting to let Morton ramble on.  It appears one of the hosts is close friends with Morton.  During the filming of the interview, a cameraman walks off the set in protest.  Not a good start to a new You Tube channel...you're not missing anything other than two people who have decided to cover the paranormal with powder puff standards and delivery.

In the interview, Morton claims he is not a U.S. citizen and the courts have no jurisdiction over him.  This raises many questions including why did Morton ever file any tax returns, why did he appear in court during his trial, and why is he petitioning U.S. courts to vacate his conviction basing such on arguments of his rights under the U.S. Constitution were violated?

It makes zero sense and is obvious to anyone this is just more in a rather long and tiring line of disjointed and nonsensical arguments from Morton.  It seems to be the fault of everyone else but Morton, according to Morton.

While I do not want to be too intrusive, the maximum punishment for Morton is probably simpler under 18 USC 3147

" A person convicted of an offense committed while released under this chapter shall be sentenced, in addition to the sentence prescribed for the offense to--

(1) a term of imprisonment of not more than ten years if the offense is a felony; or

(2) a term of imprisonment of not more than one year if the offense is a misdemeanor.

It has been held that violating section 3146 is a qualifying offense under this section.

That sure looks like something Sean would text. It's laughable when he says that Melissa has a new attorney that will overturn and void everything. They don't just do that...they were both convicted by a jury. They both would need an appeal and even then it's a slim chance they would get it.