Sir, is this a court of record? 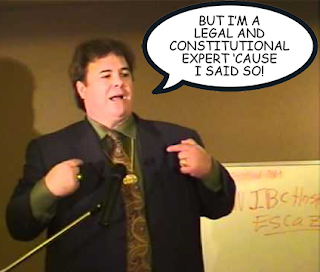 "Sir, is this a court of record?"
"I don't understand a thing that's going on here, Your Honor."
"What does any of that mean, sir?"
-- Self proclaimed "legal and Constitutional expert" Sean David to the judge presiding over his criminal sentencing hearing.

I was just sent a copy of the transcript from Sean David Morton's criminal sentencing - you can read it here.  If you're unaware, Sean David Morton was sentenced to 72 months in federal prison last September for his part in a scheme to defraud the IRS, including receiving a nearly $500,000 return based on a fraudulent tax return he filed.  His wife was sentenced to 24 months.

- Morton helped get Ronald Reagan elected president.
- Morton was responsible for dropping the murder rate from 66 to zero in a bad area of Los Angeles.
- Morton used his bogus PhD to allegedly counsel at risk youth.
- Morton "lived an exemplary life".
- Morton did social work with a former USC football coach .

Morton even laid out his old and bogus claim of having lived in Nepal with the Dali Lama and a new one I had never heard him make; that his great, great grandfather was John Morton whom was one of the signatories of the Declaration of Independence.  Morton is a proven liar and this simply sounds like more of his nonsense.  Someone told me Morton once claimed he was the heir to the Morton salt fortune.

Morton alleges to be a "legal and Constitutional expert" yet he does not know federal criminal court is a court of record.  Morton does not have a legal degree or a license to practice law and it is clear he does not know how basic court procedures work.

There was one interesting bit that came out of Morton's mouth during the sentencing; Morton has claimed that his streaming Internet radio show was the number one show on the Internet.  The presiding judge asked Morton how large his audience was to which Morton responded, "It's an Internet radio show, we have no real way of knowing."  Then how do you know it's number one?  It never was.

Way too much in the transcript for me to cover in a post here, so you'll just have to read it on your own.

Click above to read what drove Sean David Morton to file a $1mil lawsuit and lose.

UPDATE:  Morton now has a public figure page on Facebook someone set up for him and the following message was posted:

"From Sean David Morton January 6, 2018:
Melissa needs help MORE THAN I DO....but whatever you can do for either of us would be greatly appreciated, and the LEGAL stuff is going VERY WELL, and we fully expect this case to be VOIDED OUT or overturned very SOON! WE DID NOTHING WRONG and we are all learning what CRIMINALS the DOJ ARE!"
Morton lists the inmate info for himself and his wife and is asking for money. This is just more of the same rhetoric Morton has been spewing about how the case is going to get tossed. Morton even said prior to trial that the case would not be going to court, yet it did. Again, how does someone claiming to be such an accomplished psychic/remote viewer not see this all coming?

The bottom line is that Morton is a predator who preyed upon the uninformed, the unsuspecting and the desperate for his own gain by charging people thousands of dollars they really didn't have but came up with out of pure desperation. Morton claimed during his sentencing that he was charging very little and taking donations, yet he clearly charged one person $2500 and an elderly couple couple $10,000 claiming he could erase their debt through a bonding process. It didn't work, Morton kept the money, and the husband in the elderly couple passed away leaving his widow more burdened. Plainly put, Morton is a scumbag of the lowest order who never accepted any responsibility for his actions. He's stooped to lying, victim blaming, and pointing the finger at everyone else for his actions.