Below is the promo for the latest from Linda Moulton Howe's Antarctica: Alien Secrets Beneath the Ice, a video claiming a connection between everything imaginable; aliens, hieroglyphs, the Moon, the Pyramids, swastikas, Mars, the origin of humans, the Face on Mars, star maps, interstellar object Oumuamua, star gates, Nazis, Trump, Putin.  Yep, this one has it all.

"There is a huge secret hidden deep beneath Antarctic ice. Eyewitness Navy Seal Spartan 1 walked there through green, glowing halls carved with mysterious hieroglyphs. Marine Spartan 2 says these same glyphs are on the Moon and Mars. Both whistleblowers tell reporter Linda Moulton Howe that E. T. humanoids have terraformed Earth and our solar system for millions of years."

Since last year, Linda Moulton Howe has been promoting two alleged whistle-blowers on her website, on YouTube and during paid speaking gigs.  Going by the name of Spartan 1, the first "whistle-blower" claims he was a Navy SEAL assigned to a highly classified mission to extract a scientist from an underground facility in the Antarctic.  But this wasn't just any underground facility.

You see, this was a sprawling alien base two miles underground located in the middle of one of the most barren, isolated and coldest places on Earth where the lowest temperature on record was negative 133 degrees Fahrenheit.  Yes, you read that correctly, minus 133 degrees.  The average temperature is minus 57 degrees.  Makes it a bit difficult to verify anything, right?

Spartan 1 claims he was transported to the location via an aircraft carrier, then a helicopter to McMurdo Base off the Ross Sea, then traversed the unforgiving Antarctic ice on a half-track vehicle to meet a contact who had the exact coordinates of this underground base.  The subject of this extraction mission was a scientist alleged to be studying and documenting strange symbols and glyphs in this underground alien base.


Howe adds a bit of science into this story to lend it some sort of credibility crutch as it painfully limps along by covering the environmental and geological changes in the Antarctic from hundreds of millions of years ago.  Howe also throws in some history about people sailing to and around the Antarctic.

It isn't long before the history lesson quickly turns into a government conspiracy involving all nations in the Antarctic Treaty.  So what exactly is this nefarious activity involving all the countries in the treaty?  They've been allegedly funding a space fleet as a coalition for the past twenty-five years based on alien technology found in the Antarctic.

If it was so important to get this scientist out, why not just fly there in one of these alleged craft in the space fleet?  The alleged scientist that was the subject of a highly classified military extraction operation big enough to warrant an aircraft carrier, a helicopter and a dangerous trek across the Antarctic apparently isn't worth a quick trip in a space craft.  But what do I know, I'm just a lowly civilian.


The story continues that this base has eighteen feet thick doors and walls, massive doors effortlessly slide open with the push of no more than a finger, the base goes two miles under the ice, there's a later discovered port where a submarine could enter and not have to decompress because of "alien technology."  Let's not forget the glyphs and symbols all over the place that were similar to Egyptian and Mayan hieroglyphs inside the alien base or that the aliens created humans.  Don't worry, the nonsense train doesn't end here.

Spartan 1 isn't alone, he has his buddy Spartan 2 verbally confirming the information.  Spartan 2, who claims to be a former Marine intelligence officer, tells us the same symbols inside the alien underground base are also on the Moon and Mars.  He also mentions interstellar object Oumuamua was a derelict ship made by aliens and we boarded it in space.  Well, he says at least that's what he was told.

Where have I heard an alien craft referenced as a "derelict ship" before?  Give me a second, I'm thinking...

By the way, there are the structures built on the surface of and under the Moon, according to Spartan 1.  He also claims there are "2,500 humanoids" on the moon "building a mothership" and the international Earth coalition is on the Moon too.

Now come the portals described as gates that can instantly transport you across space and time.  Spartan 1 says there's a Stargate at the HARPP facility in Alaska that can take you to Hawaii.  From the frigid elements to sun and fun in an instant.  If only this hadn't already been done in the 1994 sci-fi movie Stargate and again in the myriad of television spin-off shows it fostered.

Spartan 1 gives us a little newsflash about the tale of the flood and Noah's Ark.  Yeah, the flood was caused by aliens [insert royalty free dramatic music clip here].

Spartan 1 tells of yet another extraction mission involving a nuclear physicist who escaped from Iran to Cairo.  The story doesn't make a lot of sense when Spartan 1 suddenly refers to the nuclear physicist as an archaeologist.  Well, apparently the scientist was important enough he later went to work for this coalition as some expert.  Why?  'Cause, alien bases under the pyramids.

The video continues with Howe's monotone voice droning on in spots, stories by the two so-called whistle-blowers who come off with the credibility of a pedophile at a playground, artist recreations, a few other drawings by Spartan 1 and some stock footage to weave a ridiculous tale based on the word of two anonymous people claiming we have intergalactic trade with extraterrestrials and human contractors doing two-year tours in space.  Sounds a lot like the idiotic claims of bullshit artist extraordinaire Corey Goode, which also lacks any actual evidence.

Don Shipley, a retired Navy SEAL Senior Chief, makes it his business to expose those making false claims of military service.  You can see some of his work here.  When Shipley heard about the claims of "Spartan 1", Shipley addressed the claims as "bullshit."

Shipley publicly stated he sent an e-mail to Howe advising Spartan 1 was a fake, and further advised Howe he intended to go public with his knowledge.  Shipley says Howe never returned his e-mail.  Shipley, in the video above, talks about why Spartan 1's claims are false.

Why did Howe choose not to disclose the opinion of Shipley, an expert who retired from the Navy SEALs and someone who was active during the time frame Spartan 1 claims to have been a SEAL?  Simple; information contradicting sensational claims on a video you're trying to sell does not make for good sales.  Howe has a pattern of ignoring and not disclosing information contradicting the sensationalism of her stories and claims. 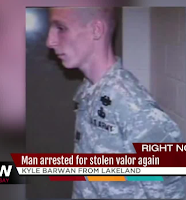 People making claims about false military service who have or have not served should be extremely careful.  The Stolen Valor Act of 2013, signed into law by then President Obama, makes it a federal crime to falsely claim military service, embellish rank or falsely claim to be the recipient of any valor award(s) with the intent to obtain money, property, benefit or noteriety.  Unfortunately, this isn't the first idiot involved in UFOs to falsely claim some sort of military service or high rank, I recall a particular idiot claiming he was a "colonel" in some secret organization.

In the end, this one-hour and five minute video relies on gullible viewers and rabid Howe fans to readily consume conjecture, nonsense and not a shred of proof supporting any of the claims made in this low grade production that wasn't worth the time or money.  Yes, I bought it online and sat through it, but you can share in my pain for free - Howe did a series of YouTube videos on this very tale.

Howe did some good work very early on, and it is very sad to watch her fall so far over the years.

Antarctica: Alien Secrets Beneath the Ice is about five-bucks to rent on some platforms, $15 to buy.  Howe, of course, charges $30 on her website.

"The most hilarious web posting we have read in a very long time comes from Whitley Strieber's "Unknown Country", dated 9/30/05. Linda Moulton Howe is described as "our Dreamland science reporter". We ask - what, if any, are the scientific qualifications of this pleasant but extremely gullible lady?? Inquiring minds would like to know!"