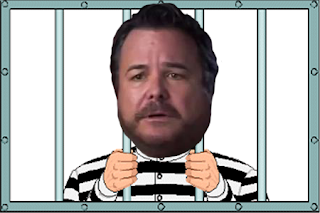 Bogus psychic and convicted felon Sean David Morton was scheduled to be sentenced today for his part in a tax fraud scheme.  Prosecutors in the case recommended an 87 month term of imprisonment for Morton.

Morton was to appear in a Los Angeles, California federal court today at 11AM (PST) and failed to show up for sentencing.  A source within the United States Attorney General's office confirmed a federal warrant has been issued for Morton's arrest and his current whereabouts are unknown.

Morton and his wife, Melissa Ann Morton, were accused of filing false tax returns and charged victims thousands of dollars claiming their debt could be erased through a bonding process , in spite of knowing the process did not work.  When victims sought refunds upon discovering the process did not work, Morton refused to refund their money plunging them further into debt.

Morton also defrauded the government out of nearly half-a-million dollars by filing a false tax return and forging other tax documents by submitting multiple copies to various IRS offices in an effort to circumvent the IRS's system.  In all, Morton attempted to claim more than $12,000,000 in refunds even though he does not have any verifiable income.


"Defendant reported no income on his financial statement, but monthly expenses of $3,306, with no genuine explanation as to how he meets these expenses."
--United States Parole & Probation report on Morton.

During a 2015 federal bankruptcy hearing, The Mortons lied about their business interests and attempted to mislead bankruptcy officers about their finances, causing their bankruptcy filing to be denied.  Morton filed a number of bizarre motions and arguments during the bankruptcy case including this one.

Agents from the Internal Revenue Service's criminal division began investigating Morton and his wife after Morton filed multiple fraudulent tax returns and documents, including OID (Original Issue Discount) forms he claimed were issued to him by a bank.   Bank employees testified the OID forms were never issued to Morton and an expert witness confirmed the documents submitted by Morton were fraudulent.

The investigation also focused on Morton and his wife obtaining a nearly half-million dollar tax refund they were not entitled to.  The IRS investigation found The Mortons moved quickly to divert the money to different accounts in an effort to hide it from the IRS, which included withdrawing $70,000 in cash and later lying to investigators about their bank accounts.  Part of the money was used by The Mortons to purchase a BMW automobile. 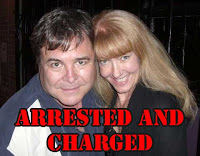 In January 2016, a federal grand jury indicted The Mortons on 56 felony counts including fraud and conspiracy.  In February 2016 while disembarking from a cruise ship, The Mortons were arrested by federal agents and later released after posting a $10,000 bond.  Federal agents also served a search warrant on an apartment The Mortons were living in and seized documents, computers, and other items.

The Mortons entered not guilty pleas and the case went to trial April 2017 with Sean David Morton representing himself while his wife obtained court appointed counsel.  Morton previously claimed to be a "legal and constitutional expert" though he does not have a law degree and is not licensed to practice law.

Morton filed a number of disjointed, rambling briefs and motions with the court prosecutors said were designed to delay the criminal trial.  Those documents submitted to the court included Morton proclaiming himself judge of his own court, stating the courts had no jurisdiction over him, attempting to withdraw his not guilty plea after he'd been convicted, notifying the IRS he did not fall under their rules, filing a state lawsuit in an attempt to stop federal criminal proceedings against him, and more.  A jury took two hours to return guilty verdicts against Morton and his wife on all counts.


"The Court is familiar with the multitude of nonsensical pleadings [Morton] filed and stated in Court throughout the course of this criminal case, which has not abated since his conviction.  [Morton]’s pattern of conduct of filing unintelligible pleadings began weeks after the initial indictment of defendants...The day [Morton] was released from his arrest, he filed unintelligible pleadings..."
--Dept. of Justice attorneys in a brief filed with the court on Morton's barrage of filings.

Morton's filing of numerous motions in an attempt to stall proceedings is a tactic referred to as paper terrorism, in which a person files copious amounts of paperwork to bury the court in order to delay proceedings or hoping for the court to make an error. 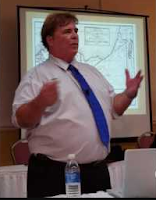 At a New Life Expo conference, Morton referred to himself as a paper terrorist claiming he could shut down a court by filing excessive paperwork and lawsuits.  A federal agent was at the conference and recorded Morton making this claim.

Morton's filing of what prosecutors called "unintelligible" and "nonsensical" motions play a part in his sentencing and add to the amount of time he will spend in federal prison if he is ever taken into custody.  When a defendant attempts to stall or otherwise interfere with court proceedings without a legitimate legal basis, it can be considered obstruction of justice in federal court.  In a recommendation to the court, prosecutors requested Morton be imprisoned for 87 months.

Morton's legal shenanigans came to an end when the Ninth Circuit Court of Appeals notified Morton the court would no longer accept his filings.  Morton asked his sentencing date be changed and the court denied that request.


"Defendant is a serial fraudster with a long history of perpetrating financial crimes and wasting precious time and resources of the government and the courts."  -- U.S. Attorney General counsel on Sean David Morton.

Morton described the case against him as "thought crime" claiming there is a government conspiracy attempting to silence him for self publishing books he says contain information exposing the government.  In spite of this alleged conspiracy to silence him, Morton's books are readily available online and he has freely discussed them on Internet podcasts and videos as well as at conspiracy conferences.

When the Securities and Exchange Commission sued Morton and his wife in 2010 for swindling investors out of more than $6,000,000 in what was called a "psychic scheme", Morton filed an inordinate amount of documents and briefs with the court in an attempt to stop the Securities and Exchange Commission from suing him.  The SEC found The Mortons diverted large sums of investor money into personal and other business accounts including $250,000 Morton put in his Prophecy Research Institute.

Morton publicly claimed his investment account had been certified by a prestigious accounting firm when it had not.   The SEC was successful suing Morton who was ordered to pay back millions.  Morton was also sued by investors including an elderly woman who lost her life savings in the scheme.  It is not known if Morton has paid anything to the SEC or the victims.

Morton was exposed in the ufowatchdog.com investigation The Shameless Psychic and his Porphecy of Lies, in which the majority of Morton's educational and background claims were found to be false.  Morton attempted to sue ufowatchdog.com for $1,000,000 claiming the story was designed to defame him and was untrue.  Morton was only required by law to prove a single false statement had been made.

After failing to show the court any of the information published was untrue, Morton lost the case and was ordered to pay ufowatchdog.com $16,000 in legal fees.  Morton continued disparaging the investigation and failed to respond to a challenge to provide his proof even when directly contacted.

Morton's co-conspirator/wife Melissa Ann Morton (pictured below, left) is scheduled to be sentenced July 24th and she has acquired new legal counsel. 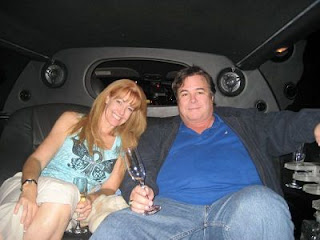 Morton gained notoriety in psychic and conspiracy circles for his fast talking appearances on the popular late night radio program Coast to Coast AM and was heavily promoted by then host Art Bell.

Morton made predictions on the program and claimed to be a UFO insider with government and intelligence contacts.  The majority of Morton's predictions failed to come true and UFO cases endorsed as genuine by Morton were often found to be hoaxes.  Morton advertised himself as the"World's Foremost UFO Researcher". 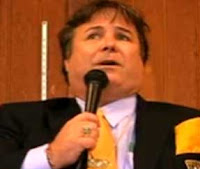 Morton's self published biography changed multiple times throughout the years to incorporate areas that were popular at the time.  Morton's original biography was erased from his website in the wake of the ufowatchdog.com investigation being published.  Morton later continued making claims in his biography that have been refuted.

Morton hosted an online streaming radio program and boasted it to be the number one show on the Internet with millions of listeners, though no data could be found to confirm this claim.

Morton wrote and self published a newsletter that later ceased publication amid complaints from subscribers that it was either late or never published.  The newsletter was also a focal point during the SEC investigation due to Morton using it to entice investors.

Touting himself as "simply being the best" psychic in the world, many have wondered why Morton was unable to foresee his future legal troubles.
at June 19, 2017

Well, I'm sure the other psychics will be able to help the legal system find out where he is hiding???

Excellent reporting, watchdog. So, the fat man is on the run, leaving his wife in the lurch. What a nice guy...